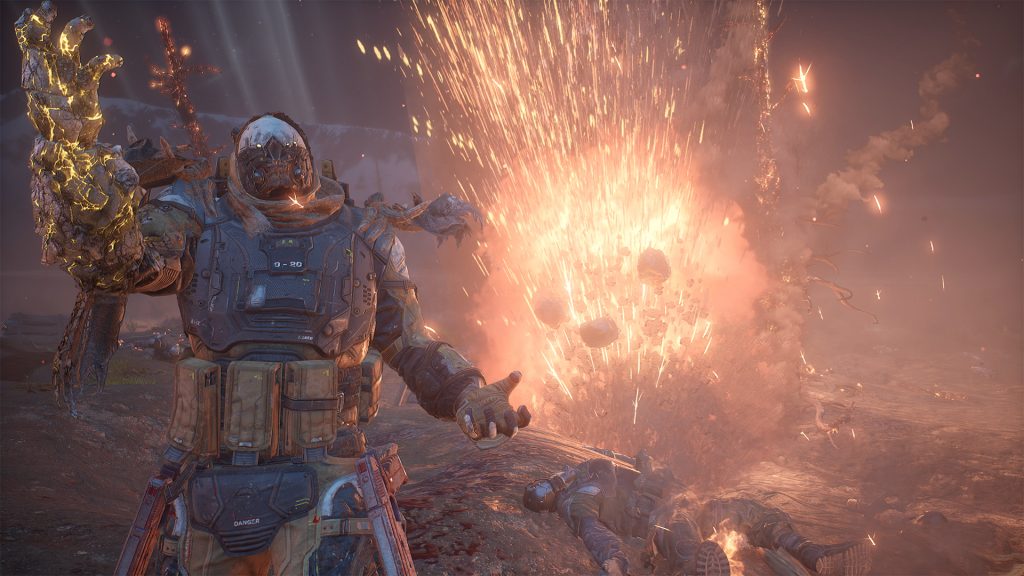 At a recent press event, People Can Fly showed off the final class in their upcoming science-fiction looter shooter, Outriders. Fellow DualShockers writer Ricky Frech and I were able to try this new class, the Technomancer, in a hands-on demo. After a few hours of playing the game, I came away from the event more excited about Outriders overall than I did going in, but I still have some reservations.

The Technomancer rounds out the four classes that players can choose from in the upcoming RPG, joining the likes of the Devastator, Pyromancer, and Trickster that have been previously shown. Serving as more of a support role, the skills that a Technomancer can bring with them into combat include various turrets, freeze grenades, a minigun, and most importantly, a group-wide heal.

We began the demo in a camp-like area, where we could speak to villagers, check or craft our gear, and assign our skill points to our tech-trees before setting off. Our characters were fairly beefy, starting at level 30 with our characters kitted out with full epic gear, a ton of skill points, all skills unlocked. The events we played take place roughly 15 hours into the campaign. Our team of three was ready to take on the world, or so we thought.

Loading up a quest, we had to clear an enemy-infested roadway to allow transports to get through safely. This is a reasonably standard request in these sorts of games and so we began our mission. To keep things brief, we died… a lot. Wave after wave of the standard enemies kept spawning, taking us down one-by-one until our revives were gone, and we were left to reload, each time getting a bit further, but still getting routed in the end. It wasn’t until I held back for a moment and looked at what other skills I could swap in that we were able to begin to turn the tide.

The real MVP of our demo ended up being a group heal that the Technomancer gains. With the heals in tow, our survivability skyrocketed, and we managed to complete the mission at long last. Though things still did get hairy when the teleporting elite units were dropped in and the angry fire tornadoes appeared to try and end us. Our time with the rest of the missions we played in the demo progressed far smoother after we got that first mission out of the way, and we had a better grasp of the new class. 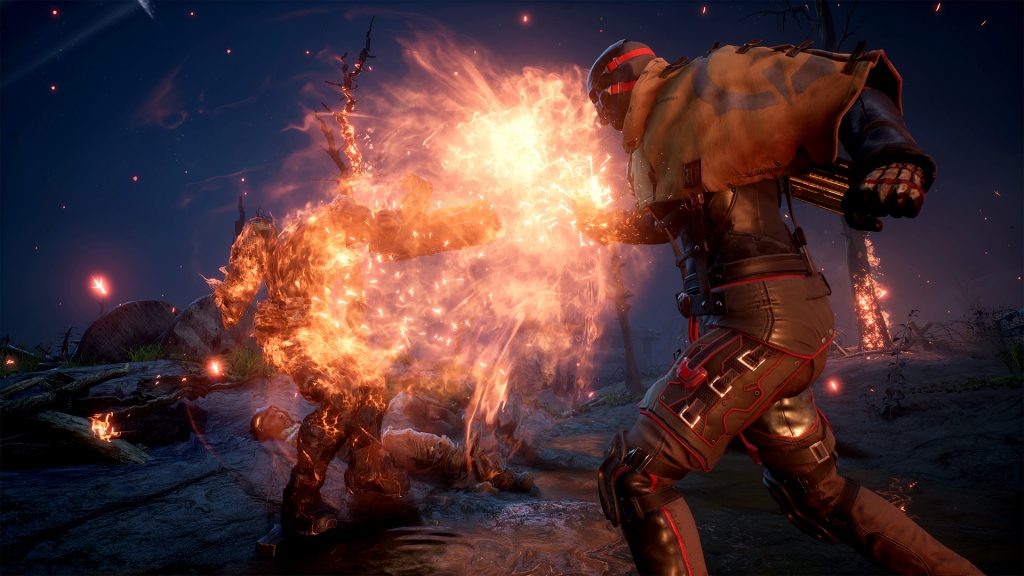 MMO players who like to run as support will find a lot to love with the Technomancer. The class has options to contend with close, mid, and long-range threats with a couple of handy abilities that can help with crowd control and enemy mobs. With their freeze grenades, they can stop any enemies in their track, while their various turrets can dish out the pain with missiles and poison. The Technomancer’s skill tree has options that allow them to do additional damage using sniper rifles, too, if you prefer to stay in the back. When the going gets tough, and the Technomancer finds themselves in a pickle, they can pull out the big guns using a skill that generates either a minigun or a rocket launcher. Having a summonable minigun on a cooldown was a blast, and it came in handy a bunch of times towards the end of missions when the elite enemies would begin to spawn.

For anyone curious how Outriders feels to play, the best way I can describe the gameplay is to say that it feels like a combination of Gears of War and Anthem. The shooting and cover mechanics reminded me distinctly of the Gears of War games, just with less muscly and gruff characters. You will be running and gunning, ducking, and diving behind cover as you take out enemy soldiers and monsters of the wild. The Anthem influence, thankfully, comes more from the bit of story and setting that I got from the demo. You are an Altered One, a particular soldier that is capable of using special element-based powers. The world of Outriders is currently dealing with a strange storm that has odd properties that are affecting the world at large. Luckily though, Outriders is an all-inclusive game and not being touted as a game as a service, which is a big plus in my book.

What I was instantly surprised by was how RPG-heavy Outriders is. I wasn’t expecting an expansive and rich skill tree to play around with the right mix of options to let me specialize in various gun and element types or provide bonuses to specific special attacks. I focused on going down the poisonous pestilence route and prioritizing damage done by my assault rifles, which made me and my poison turret quite formidable. 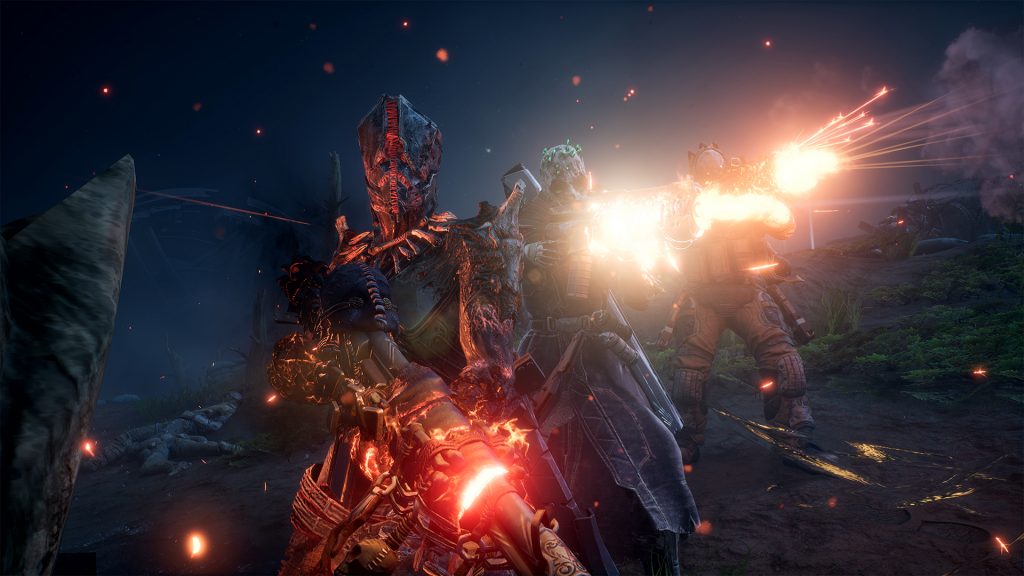 Each enemy I killed more often than not would litter the ground with a new gun, piece of armor, or other various pieces of loot to scavenge through. As a big Diablo fan, I felt right at home in the piles of goodies I was finding. As a sucker for armor that appears on your character when you equip it, I am happy to report that all the armor pieces you pick up and equip will change the appearance of your avatar.

For all the good things I found during my time in the demo, there is one aspect that leaves me a bit concerned: missions. The missions we played all felt very similar, tasking us to fight waves of enemies to progress to another area only to run into the same sort of enemies in even more waves. The foes we encountered lacked much personality and were a bit too bullet-spongy. With the large number of enemies you contend with at once, after a time, it just gets redundant. I’m hoping my concerns of uninspired, repetitive quests and lack of enemy variety prove to be unfounded, and that my experience with this is due simply because I only had a chance to play a sliver of the game.

Getting some time with Outriders left me excited to see and play more when the game releases. It is a far more in-depth RPG experience than I expected, and I can’t wait to check the other three classes. You can also check out what Ricky thought of Outriders when he tried it back earlier this year, too. Hopefully, the retail release will be able to provide more variety with missions when it comes out later this year.