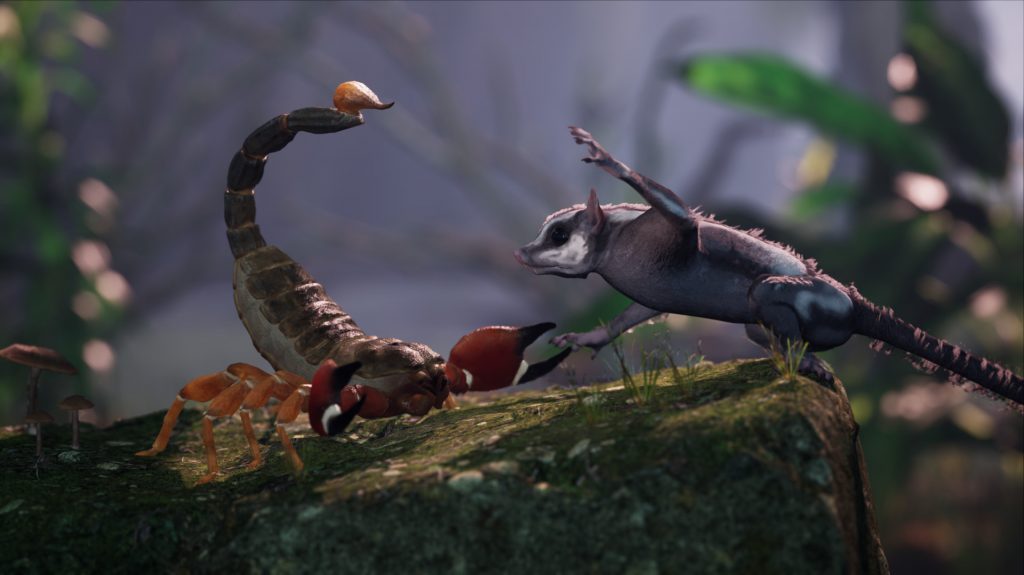 Away: The Survival Series is one of the more unique games you’ll see this week. The game from Breaking Walls has you starring as a cute, little sugar glider as you explore the world and protect your family. It reminds me a bit of Shelter, though Away certainly is going for a different look and hopefully will learn from Shelter‘s problems. Give the debut trailer a watch below.

One of the most intriguing aspects of Away is the nature documentary-like narrator that talks over the action at times. He gives you insight into the world around you, as well as providing a soothing voice to tie everything together.

As a sugar glider, you can climb, fight, and even “fly” with style. This lets you explore the environment in some really nifty ways. Of course, you can’t just glide everywhere at no cost. You’ll need to find food out in the environment to keep your sugar glider moving.

The sugar glider also isn’t the apex predator of its forest. That means you’ll have to fight off creatures like scorpions as you move about. This is where the game employees a little bit of Dark Souls-style combat. You have to time your dodges and look for openings to outsmart your opponent. Obviously, it’s not nearly as intense as a Souls game, but it does give the combat some added flair.

Away: The Survival Series looks promising in its early stages. As mentioned before, I hope they learn from something like Shelter. That game was, without a doubt, cool, but lacked focus in gameplay and narrative. Here’s hoping Away doesn’t fall to a similar trap.

Away: The Survival Series is set to launch on PC and PS4 in early 2021.

The post Away: The Survival Series Puts You in the Paws of an Adorable Sugar Glider by Ricky Frech appeared first on DualShockers.

Netflix’s live-action Winx Saga goes all in on the magic, but not the Magical Girls
Box of Pokémon cards sells at auction for more than $400,000, a new record
Tom Bombadil is the Stan Lee of Lord of the Rings
Here’s What’s Coming to Game Pass by the End of January
Hitman 3 Had the Series’ Best Digital Launch Sales Yet