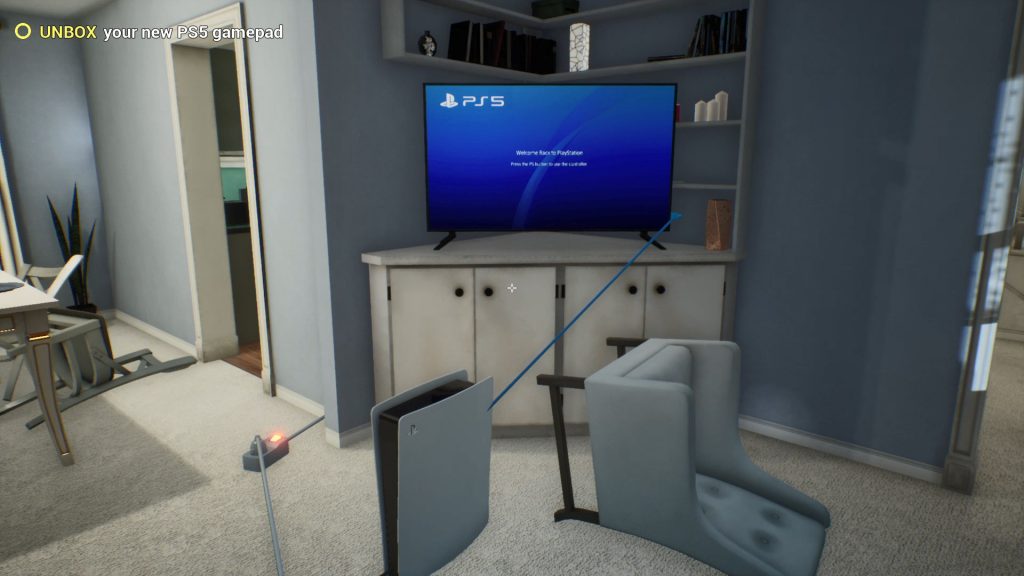 The PS5 has finally been released, and as of last week, gamers around the world now have the chance to jump into the next generation of gaming. As we saw during its initial pre-orders, the PS5 is likely going to be hard to get for a while, but it’s not all bad news if you weren’t able to get your hands on the system itself; instead, you can feel the sensation of having the system virtually with this PS5 simulator.

Game developer Alex Grade has made and released PS5 Simulator which, as the name implies, allows players to simulate the experience of having a PS5 in their home. However, in the tradition of other simulation games on PC, things take a bit of a wackier turn than you might expect. You can take a look at some gameplay from the simulator below, and you can download it for free right here on Itch.io:

PS5 Simulator – unpack, set up and play your brand new PS5 in this ridiculous physics based simulator game!https://t.co/M8y3dCCYiE

The game itself is very simple but meant to be tongue-in-cheek: PS5 Simulator literally simulates you getting the system delivered to your home and then having to plug in the system to play. Of course, it also happens to feature some very interesting physics at play, as you struggle to try and connect the system to your TV, manage your cables, and finally get the console up and running. For fans of games like PC Building Simulator, it seems like this one might be up your alley as well, with a little extra added lunacy.

PS5 Simulator is available for free on PC, while the actual, real PS5 is available now in select countries and will have its worldwide release on November 19, 2020.

The post Yes, Someone Made a PS5 Simulator If You Don’t Have the Console Yet by Ryan Meitzler appeared first on DualShockers.

MST3K Turkey Day: The Long History of Mystery Science Theater 3000 and Thanksgiving
Fandoms Roil Online as Joss Whedon Suddenly Quits His New HBO Show The Nevers
Fatman Review: Mel Gibson as Santa is Not Your Normal Christmas Story
Hogger, a World of Warcraft goofy legend, smashes into Heroes of the Storm
The Mystery of D.B. Cooper Review: HBO Documentary Does its Best to Close the Case